I just had the most embarrassing experience... My money is not enough to pay the bill!!!! I thought they accept credit card but apparently they don't (maybe coz it's new) and they don't accept debit BCA either..... I called everyone i knew hoping they'd be in MM so I could borrow some money but the -staring across the window- thingy was useless. In the end, i had to go back to GF to the ATM..

The suki stuffs are pretty much the same as the others. Varieties of meatballs, pangsit, suikiaw, mushrooms and veggies... The different is u order them per piece instead of portion. The price is not as cheap as i predicted, one suki stuff costs around Rp. 3.000 - Rp. 6.000 (per piece). The soup is delicious (lots of MSG i guess...)

U can boil and grill what you've chosen on a mini pan and mini pot available on each table. It's quite fun how u cook ur food on mini cookware xD 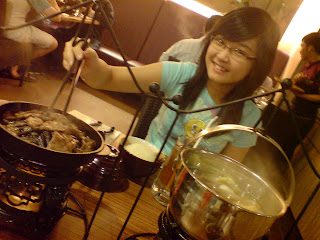 Email ThisBlogThis!Share to TwitterShare to FacebookShare to Pinterest
Labels: Food, Story of my life