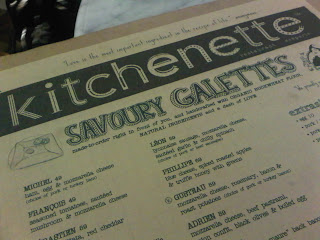 Kitchenette is Ismaya's latest resto. Located in the middle of Plaza Indonesia, this place is really really packed!!!!

Why do we love Ismaya's resto? Simple, they have strong concept. Kitchenette offers u a kitchen in the middle of a mall. Everything is designed as homey as possible. The tables, the decor, the waiter/waitresses uniform, the lighting and of course the menu. For this matter, Ismaya is definitely the best in town 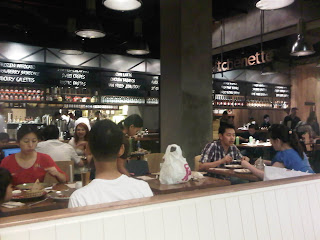 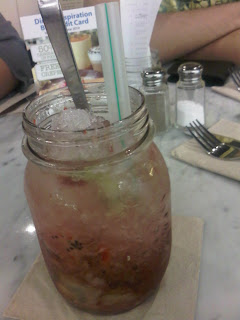 This is a damn expensive drink but totally worth it. It's fresh, it's cold and it's yummy! Not too sour, has a hint of sweetness and the crushed ice is just great. They use crushed ice, not some small ice chips to make it looks like crushed ice. I noticed that crushed ice melts slower than ice chips, so the drink is still cold and icy even after I finished my dinner. 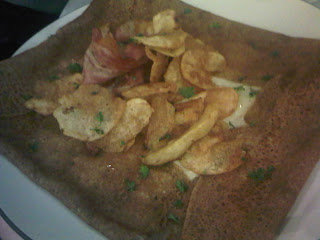 Kitchenette specializes in Galettes and Crepes. Gusteau is a gallette (savoury crepes) with potato chips, pork bacon and rosemary as topping. Hmm.. I dunno why, but the galette thaste wheat-y, and it's a good thing. Finally, something new :) It's a bit pricey for the portion they serve but it was good. Nothing special though... Oh, I love the pork bacon!!! 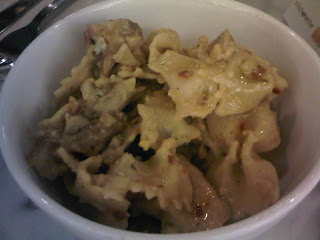 U can order this salad as a combo for the galette. It was... SMALL!!!!!!!!!!!!!!! When it first came, I was shocked. U have to add Rp. 25.000 for the salad and all u get is a small bowl of pasta salad... At least make it look bigger, add some garnish or sthing. The salad was just ok, bowtie pasta + dressing + goat cheese + shredded chicken. Goat cheese is a yucky thing, I myself don't like it, but this pasta only has a small amount of it (thank God) 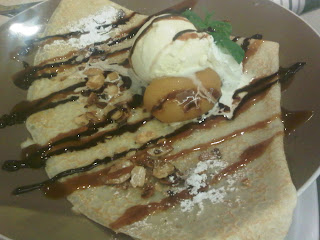 Now this one is just YUMMYLICIOUS!!! I'm a big fan of peach so maybe it's a bit biassed hehe The peach, awesome! Ice cream awesome! The crepe yummy! The chocolate and caramel sauce + chopped nuts just complete this super dessert 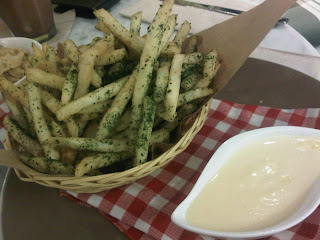 YUMMYLICIOUS!!! The fries are fried perfectly, even better than Bistro Baron's. It's covered in seaweed and they serve it with cheese dips. The cheese dips is perfect, not too thick, not too cheesy and not too salty. It makes a damn good snack, big portion too :)

I love the food here despite the high price. The place is cozy even though it was packed. One thing that bugged me was the service. When I went there, it was around 5.30 P.M on Sunday. The place was full and a lot of people was standing in front of the resto. My friend Kus Kus was trying to put a name in the waiting list. Surprise! There's no one on the Maitre'ds table. We waited for a while and then this girl with a ponytail came. Sour faced and no smile. She looked at us and didn't say a thing (it was not just us, there's other guests too). 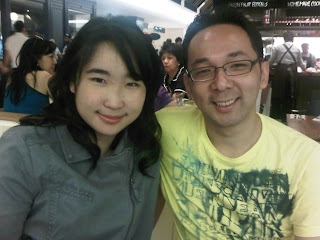 Thanks Cuplis for the dinner :)
I tweeted bout this and the management responsed to me this afternoon, well it's a good thing. I really appreciate it. Oh.. Last but not least, the waitress that served us was really really nice. I forgot her name but she was nice. Ternyata service nya ga seburuk itu.. :)

Recommended!!! Will be back to try the main course