I just got back from 18 days trip to Europe (London, Amsterdam, Paris and Rome) and super excited to share with you guys! This trip was planned from like a million years ago and my savings got hit big time but well it is all worth it!!!

First of all, I'll share some general info about my euro vacation and tips for travelling to Europe.

1. I booked Garuda Indonesia CGK - LHR - CGK economy class seat and 30 KG baggage allowance for 8.5 mill IDR per person. Booked it on August 2016 so around 10 months before the date. The CGK - LHR flight is a transit flight in Changi Airport for around 45 minutes but the LHR - CGK flight was a direct flight. Garuda's service is great, food is good and entertainment is more than enough to accompany you in the 14 hours flight.

2. For accommodation, I mostly chose 2/3 star hotels instead of Air BnB since the price is not that much different (not like in Japan where Air BnB is far more affordable than hotels). My AirBnB experience is so much different than the ones in Japan (both Tokyo and Osaka). The first part of my London trip, I picked AirBnB, renting a room in the host's house in Stockwell area. Room was not clean, lots of dog hair on the bed (I'm slightly allergic to dog's hair) and the room condition was far from what I expected from a developed country housing complex. Host is nice and friendly but don't expect impeccable service and cleanliness like Japan host.

3. To travel across Europe, mostly I chose plane instead of train. Only used train once from Amsterdam Centraal to Paris Gare du Nord on Thallys Trains for around 3 hours. The rest of the city/country hopping I use Easyjet, a budget airline from UK which IMO is quite good. Taking the plane was a good choice since the cost of the ticket is not much expensive than train tickets, you'll save a lot of time compared train journey and you don't have to worry about storing your luggage. On my Thallys train journey to Paris, I find it hard to stow your luggage unless you board the train as fast as you can since luggage space is super limited. Just be careful when booking your plane tickets, pay attention to the airport location since budget airlines often use secondary airport instead of the main airport of the city so maybe the transportation to airport is more limited.

5. Make sure to get small denomination when exchanging your currency. My 100 euro bill is not that easy to use since ticket machines doesn't accept note that big and every time I use the 100 Euro bank notes, it has to be checked using a machine. For Pounds, prepare 50 Pounds notes or smaller since tickets machine only accept 20 Pounds note at max. Prepare credit card since it can be used to purchased everything in Europe and make sure you notify the bank before you take it to Europe. ATMs are everywhere but I don't really know what the exchange rate is so maybe it's useful for emergency cash withdrawing.

6. Prepare internet connection. I rented wifi from wi2fly. The signal is good in London but on and off in some spots around Europe such as Florence, Rome and Paris. They will deliver the wifi 1/2 days before your departure date and pick the wifi again 1/2 days after you are back in Jakarta. Go to the website for more info.

7. And last... Be careful, Europe is not the safest place. Hard to believe that I feel safer in Bangkok or Jakarta than in Europe. Especially Paris! Will tell you guys about it later...

Now let's start with the the first part of my London trip!!

The flight from Jakarta is around 7 A.M and arrived in London around 7 P.M London Time. After that long journey, I arrived at Heathrow Airport, both excited and confused. Well first thing to do is finding where the train/subway station is. After getting my luggage and passport control, getting to the train station area takes around 10-15 minutes nonstop walking. REMEMBER, PURCHASE THE OYSTER CARD. Oyster Card is a card for public transportation in London, same like Pasmo/Suica in Japan or Octopus in Hongkong. It can be bought on vending machines at the entrance of the Heathrow Underground Station using credit card or coins or bank notes. It's so easy to buy it, just follow the instruction on the screen. I took the Piccadilly Underground Line and got of at Green Park Underground Station then I took the Victoria Line and got off at Stockwell Station. All info is by the magical Google Maps :)

First bite in London, a Sandwich from supermarket just outside Stockwell Station. At first, I was kinda surprised that a sandwich as simple as that cost 3 pounds (around 50K IDR) and didn't taste good, welcome to London I guess..

So the next day, early morning we wake up and head straight to Hyde Park. Got up really early, maybe around 7 A.M already got out of the house and finding our way to the famous Hyde Park. My body clock is still in Jakarta time, 7 A.M London is 1 P.M Jakarta. Apparently Sunday morning in London is quite slow... The huge park was empty. We only found some joggers and cyclist and failed miserably in finding anything interesting about the park. Well it is huge but not pretty, just a big ass park in central London. We wondered around and making our way to the Buckingham Palace 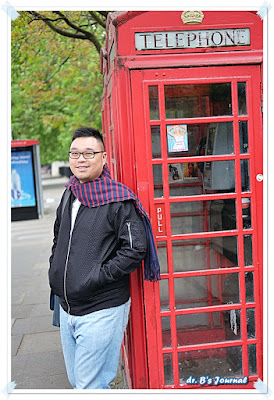 Buckingham Palace was grand and elegant. It exuded everything royal and British, was lucky enough to witness the guard exchange at the palace. I couldn't say much about the experience since it is a photo spot only, we couldn't enter the palace. 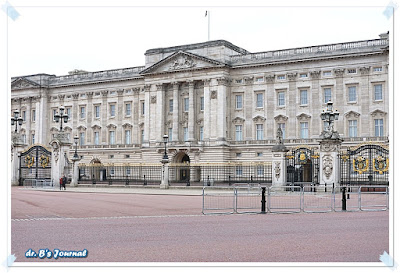 After taking some pictures, we walked to find.. FOOD. Super hungry!!! So decided to find our way to the London Eye and hopefully found a place to get some breakfast. Using Google Maps, we walked for around 15 minutes then found this small cafe that serves breakfast called Bon Gusto. Here's what we had 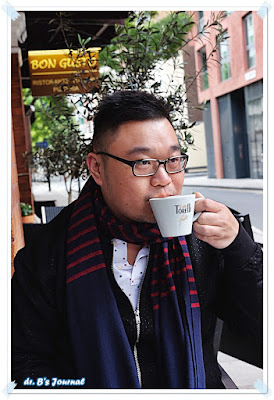 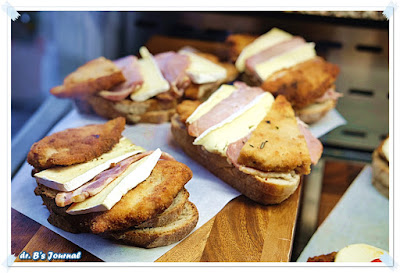 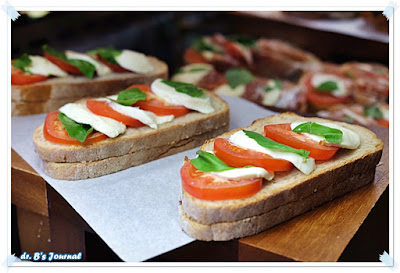 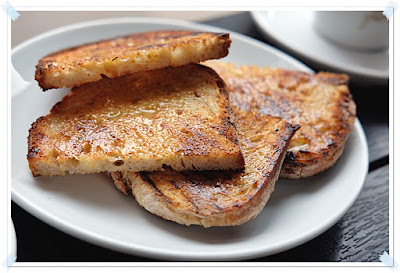 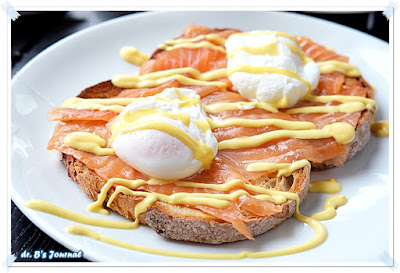 Smoked salmon on top of toasted sourdough with two poached eggs. At first, I got into the bread shock syndrome. Suddenly bread is not beautiful anymore and I want nasi uduk desperately for breakfast LOL 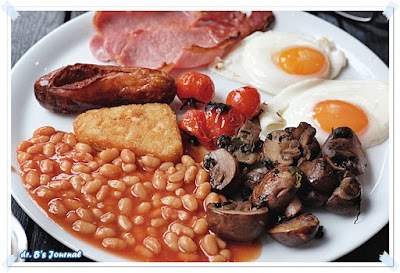 When in London, have English Breakfast. I love how the ham is smokey and rich, pointing itself as the star of the dish 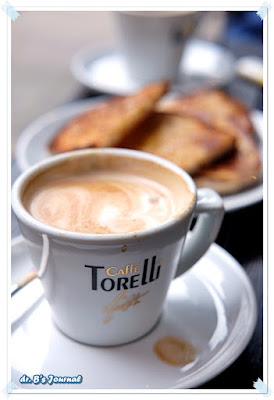 When in England, drink tea. Well the coffee kinda sucks so maybe this is the right statement.

After finishing the food in London chilly morning, we continued our morning walk to the parliament square. The place is magnificent, first we found Westminster Abbey, the place where the royals got married. It was a beautiful church but full of tourist. Then, there's the Parliament and the Big Ben. With the bells ringing, somehow it's feels very British just standing there. All the buildings were historical and located at close proximity to each other, so this is a must visit when visiting London. 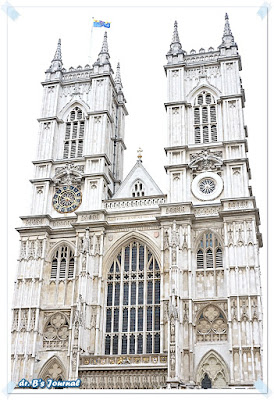 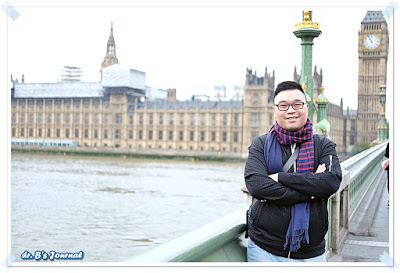 Go across the Westminster Bridge and you'll find London Eye at the left side. London Eye is situated at an entertainment complex which also housed Shrek London, The London Dungeon and Sea Life London Aquarium. There's a McD to satisfy your junk food crave too :) I only tried the London Eye (£26/person) which is a giant ferris wheel at the side of Thames River. The view was amazing, London's skyline is quite unique with the river thames in the middle and classic buildings along the river combined with modern architecture, giving a unique city view from the top. 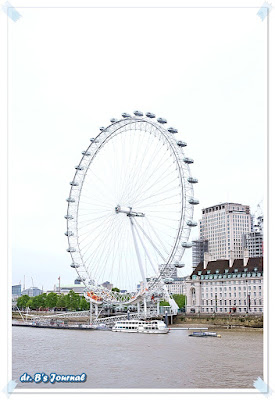 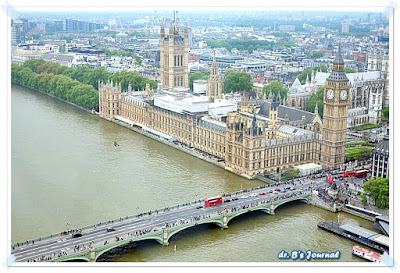 After spending quite some time there (the queue is very long!) I headed to SoHo area, a commercial district with lots of shops and restaurant. From London Eye, go to Waterloo Underground Station, around 10 minutes walking away from the river then take Bakerloo Line to Piccadilly Circus. Shopping in London is not cheap but depends on what you buy you'll get a better bargain than Jakarta. Got a pair of Adidas NMD for £100/1,8 mill IDR, quite cheap compared to the price in Jakarta and how hard it is to find that pair of kicks.

Around SoHo, I found this asian food stall called Wok to Walk, a sort of fast food for take away. It made me so happy than I can finally have rice and noodle!!!! When you order, you have to pick a carb, egg noodle/rice/glass noodle etc. Then pick a protein, beef/pork/prawns/chicken, etc. Last, pick a sauce. The stir fry dish already include egg and veggies, cost around £6-£7 a box. Yummy!!!! Rice never fails :)

After a long day of walking and shopping, it's time to end the day, So heading back to Stockwell to prepare for the flight to Amsterdam.

Getting to Amsterdam was not hard, since I use Easyjet, the flight departed from Gatwick Airport. To get to Gatwick Airport, we can use the Gatwick Express from Victoria Station (just tap the Oyster Card with enough credit). The single journey cost around £18, quite expensive but fast and hassle free. In Gatwick Airport, Easyjet uses self check in machines so it's a bit tricky but the staffs are very helpful. All they do is check your visa before checking in your luggage. After that, just go to the boarding gates, so easy! Before boarding, had lunch at Wagamama, a British chain restaurant serving japanese food with british taste I guess 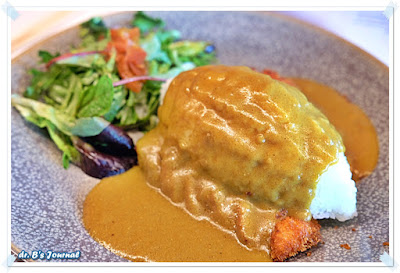 IMO tastes weird. The curry is a bit sweet and serving that kind of salad next to a curry?? Seriously...


I'll see you guys in my next post of Amsterdam!! Byeeee
Posted by Unknown at Wednesday, May 31, 2017