I just tried a new Japanese resto @ Plaza Indonesia. Located at the Lobby of PI, this mysterious/glam/dark resto is just luring people with empty stomach... After a quick glance at the menu, i realized dat this resto is connected to Kiyadon. After i checked, the waiter told me dat the owner is the same.... No wonder there's a similarity in the menu

The Food
1. D.I.G (Rp. 65.000)
Yummy!!! It's the same as the one in Kiyadon but this one is a little bit smaller. The sauce is thinner than Kiyadon's and less floss than Kiyadon's but it's not a bad thing. That makes this one lighter and u can eat more :p 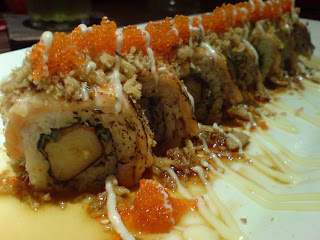 2. Japan Seafood Spaghetti (Rp. 65.000)
YUMMYLICIOUS!!!!!! Maybe it's because i'm hungry but I think this is the best japan style spaghetti i've ever eaten.... Much much better than Pasta de Waraku's. The cream sauce is light but creamy, the spaghetti is al dente, the fried salmon is superb and the tobikko..... Oh my effing God... I can feel them dancing on my tongue (just like those cooking anime LOL) 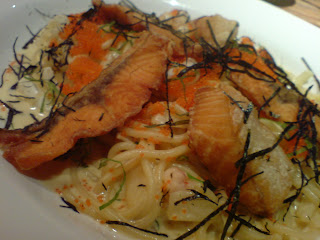 3.Unagi Cream Cheese Sushi (Rp. 50.000)
Yummy!!! A little more tonkatsu sauce won't hurt.... I can't sense any kind of smell or weird taste in the unagi (that's a really good sign) plus the unagi chunk is kinda huge. The combination of cream cheese and Kani is just perfect 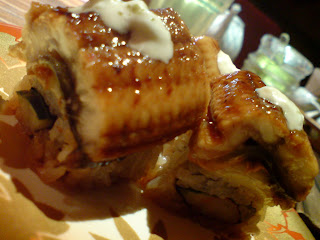 Definitely gonna come back for more and more and moreeee!!! I haven't mentioned the decor right? It's very glam especially the long table. It'd be nice to celebrate something there :D